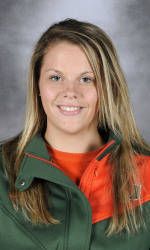 Coral Gables, Fla. – The University of Miami rowing team officially begins the spring campaign on Wed., Mar. 10, playing host to the University of Connecticut on the Indian Creek Waterway in North Miami Beach, Fla. The race is scheduled for 9 a.m.

After completing the first scrimmage of the spring last weekend against the University of Michigan in Tampa, Fla., the Hurricanes are eager to begin the new season with their first official race. First-year head coach Andrew Carter and his staff has worked tirelessly throughout the off-season preparing for what is expected to be an exciting spring campaign.

For Miami, this is the second consecutive year the Hurricanes host the Huskies to the Indian Creek Waterway. Last year, Miami won all three varsity events, and lost just the one novice race.

In last season’s affair, UM opened the day with the First Varsity Eight boat collecting a time of 6:50.10 to move past UConn’s boat – timing at 7:02.08. In the Second Varsity Eight, the Hurricanes and Huskies were neck-and-neck for the first half of the race, only to see the `Canes score the win with a finishing time of 7:11.93. The UConn Huskies finished up at 7:24.09.

In Varsity Four action, the Hurricanes were untouchable again as they finished with a winning time of 8:00.30, narrowly edging the Huskies’ who finished at 8:04.40.

This year, UM sports several new faces in both competing boats, as just two races are expected Wednesday. The `Canes and Huskies will compete in a Varsity Eight race, followed by the Novice Eight.

“The goal of the novice will be to improve on our race strategy and technique from last Saturday against Michigan,” commented DeRose. “We set three goals last week, and accomplished two of them. We’ve been working on the third over the last few days, and are hoping to get it this weekend. A win would be great, but our focus is on doing things the right way. If we achieve our technical and strategic goals, then we will have a shot at beating UConn. They are a strong team, and we’ll have to be at our best in order to beat them”.

The event is open to the public, and admission is free.