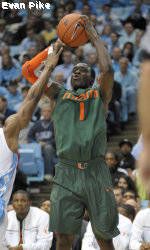 University of Miami freshman guard Durand Scott has been selected ACC Rookie of the Week for a Miami-record fourth time this season.

Virginia Tech’s Malcolm Delaney received the nod as ACC Player of the Week in the final Atlantic Coast Conference weekly honors of the 2009-10 season on Monday.

Scott scored a career- and game-high 29 points at North Carolina – the second-highest scoring production by an ACC freshman this season, converting a career-high 11-15 field goals (.733), a career-high 3-5 three-pointers (.600) and all four free throw attempts, while grabbing five rebounds, a pair of steals and an assist in his first trip to Chapel Hill.

He became the first Miami freshman since Guillermo Diaz in 2003-04 to post multiple 20-point games in his rookie campaign and is the only ACC freshman with two of the league’s top-five scoring performances by a freshman this season.

Scott added a game-high 14 points, five rebounds, a steal and an assist in the regular-season finale versus Florida State, shooting 50 percent from the field and hitting all four of his free throw attempts.

In his first ACC Player of the Week honors this season and the second of his career, Delaney led the Hokies to a pair of victories to help Virginia Tech clinch a bye in the first round of the upcoming ACC Tournament. On Wednesday night, Delaney scored 21 points to lead the Hokies past NC State in their home finale and then posted a season-high-tying 32 points and nine assists at Georgia Tech on Saturday.