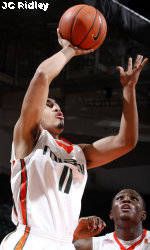 An already tough transition to college life for student-athletes becomes even more difficult when you are an extremely family-oriented person that is going to school thousands of miles from home.

As an only child until the age of seven, Quigtar spent most of his time with his family when he was young. “I did everything with my family, even my grandparents on both sides. With such a tight-knit family, I get support in everything I do.”

Quigtar has used his love for his family and sports to help him get through any tough times he might have had. But the decision on where to attend college was something that he had to work through on his own.

After considering schools he was recruited to play basketball for and west coast schools such as Arizona and Washington, he started researching Miami.

“I always knew about the U. You see UM on TV all the time, especially back then with the football team. The funny thing is that they had a rivalry with the University of Washington. Washington ended their [NCAA-record 58-game home] win streak, so I knew about that because my family is big UW fans.”

Coming from Skyway, a neighborhood in Seattle where “you know everybody”, Quigtar made the decision to step out of his comfort zone and attend Miami.

“The hardest thing about being far away from home is that I miss my family, I miss being able to see my little brother, Jordan, grow up,” said Quigtar.

Soon after he arrived at UM, he was able to find a family away from home in the men’s basketball team as a walk-on. However, it was no easy task for Quigtar to earn that final roster spot. After a grueling tryout process, the UM coaching staff cut the walk-on tryout list down to three people.

“They called all three of us in for a meeting. When I walked into the office, that was the first time I saw Coach Haith – he actually opened the door for me. They brought me in the room and said you made the team.”

It was as simple as that, with those four words, Quigtar knew he had accomplished his goal. Sitting in Coach Haith’s office, he tried to keep a “straight face” and simply said “ok”.

“When I left the office, I was all smiles. I wasted my phone battery and called all my family and friends. From there it has just been fun. It’s the best time of my life right now. “

Despite being a walk-on, Quigtar has big goals on and off the court. While his current basketball goals include making it to the NCAA Tournament and dunking in a game, his more impressive goals come off the court.

“My ultimate goal is to open a community center and training facility in the inner city. This would be to help kids and keep them off the streets, with an academic focus with tutors and a learning center. I have seen a lot of kids growing up who always had the talent, but their head wasn’t in the right place.”

Quigtar hopes to teach kids that “in the long run you can go to college and help your family” by staying on the right track.

While his family, friends and hometown “Skyway pride” have made him who he is today, it is clear that his second family is now at the U.