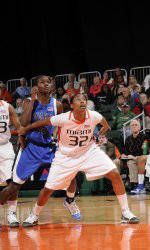 Miami to Play No. 9 Florida State in Final Road Game

CORAL GABLES – The University of Miami women’s basketball will face No. 9 Florida State in the final road game of the season in Tallahassee, Fla. at the Donald L. Tucker Civic Center on Thursday, Feb. 25 at 7 p.m.

Miami, coming off another hard-fought loss to rival and 19th-ranked Georgia Tech, will look to turn things around in the last week of the season. The Hurricanes face No. 9 Florida State on Thursday before closing out the regular season on Senior Day against Boston College.

Against Georgia Tech, Shenise Johnson was one point shy of her career-high – scoring 28 in the 77-73 defeat. It was the fourth straight game that the sophomore scored 20 or more points. In ACC play, Johnson is second in scoring at 19.8 points per game and she is the only player in the entire conference to score in double-figures in every game throughout the 2009-10 season.

A Look at the Seminoles

Florida State heads into Thursday’s contest winners of six straight, including wins over ranked teams such as North Carolina, Georgia Tech and Virginia.

The Seminoles are led by Jacinta Monroe who is averaging 13.0 points and 7.6 rebounds per game. Courtney Ward and Alysha Harvin score 10.6 and 10.3 points per game apiece. Ward leads the team with 162 assists on the season.

The Seminoles hold a 28-8 advantage in the all-time series between the two programs, but in this season’s ACC opener, Miami defeated then No. 11 Florida State 78-70 in Coral Gables. In that game, four players scored in double-figures with Riquna Williams leading the way with 27. It was the first time that the Hurricanes defeated a top-15 team since Dec. 19, 1991 when they defeated No. 10 Purdue.