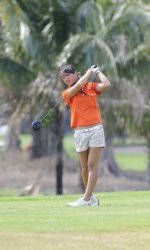 Women's Golf Tied for Seventh after Second Round at Kiawah

KIAWAH ISLAND, S.C. – Sophomore Jennifer Hirano scratched out a three-over par 75 while her sister junior Christina Hirano shot four-over par 76 as the University of Miami women’s golf team held on to a top 10 spot sitting tied for seventh place after the second round of the Edwin Watts/Kiawah Island Classic at Oak Point Golf Club in Kiawah Island, S.C. Monday.

Miami shot 307 Monday to give them a two-day total of 603 which ties Oral Roberts for seventh place. Augusta State continues to lead the tournament at 15-over 591 as a team. East Tennessee State (595) and East Carolina (595) are now tied for second followed by Minnesota (600) in fourth and Western Carolina (602) and Middle Tennessee State in a tie for fifth.

Jennifer Hirano moved up into the top 30 among individuals. She birdied twice on the day as she shot two-over par 38 on the back nine and one-over on the front nine. She shot par on 11 of the 18 holes.

Christina Hirano had Miami’s second best score of the day as she shot two-over 38 on both the front and back nine. She stayed consistent making par on 15 of the 18 holes.

Sophomore Begona Sarabia and freshman Shelby Gilbert still rank among the top 25 individuals. Both are tied for 23rd after they both shot six-over par 78. Sarabia tallied three birdies on the day while Gilbert made par on 14 of the 18 holes.

Junior Maria Ronderos finished round two 10-over with an 82. She birdied twice.

The Hurricanes wrap up play in the Edwin Watts/Kiawah Island Tuesday. UM tees off at 9:30 a.m. with Kansas and the College of Charleston.