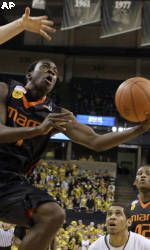 Ishmael Smith added 11 points, nine rebounds and six assists for the Demon Deacons (15-5, 5-3 Atlantic Coast Conference), who built a big first-half lead and spent the rest of the night protecting that margin. Wake Forest hardly looked sharp, shooting just 41 percent, committing too many turnovers and getting beaten on the glass to help the Hurricanes hang around in the second half.

Wake Forest led by 17 points midway through the opening half before Miami (16-6, 2-6) clawed back to within three points with about 5 1/2 minutes left. But the Hurricanes came up empty on six straight possessions when the game hung in the balance, sending them to their fifth loss in six games.