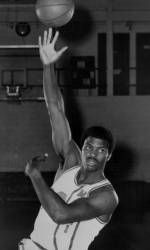 CORAL GABLES, FLA. – Former University of Miami standout Will Allen is among 12 former basketball players that have been selected to the 2010 Atlantic Coast Conference Tournament Legends class that will be honored at this year’s ACC Men’s Basketball Tournament in Greensboro, N.C., in March.

“The University of Miami community is tremendously proud of what Will Allen has accomplished,” said UM Director of Athletics Kirby Hocutt. “He has used his life to empower and enrich so many people’s lives – and there is not a more noble goal than that. We are truly honored that he will be representing the University of Miami as this year’s ACC Men’s Basketball Tournament Legend.”

Allen (1969-71), a talented post player, closed his career sixth on the Miami career scoring list with 1,293 points and second in career rebounds with 913. The Rockville, Md., native averaged 17.2 points and 12.2 rebounds per game for his 75-game career, topping the 20-point mark 28 times during his three years with the Hurricanes.

Allen, who graduated from Miami in 1971, was drafted in the fourth round of the NBA Draft by the Baltimore Bullets and in the 12th round of the ABA Draft by the Miami Floridians. He played one season for the Floridians, and then played professionally in Belgium for five seasons. After completing a career in marketing in 1993, he co-founded Growing Power in 1995, an organization which brings farming skills, healthy food and a sense of community to urban residents, going on to earn a $500,000 “genius” grant from the MacArthur Foundation in 2008. Since his retirement from basketball in 1977, he has resided in Milwaukee, Wis.

The Legends will be honored at this year’s ACC’s Men’s Basketball Tournament in Greensboro, N. C., March 11-14. They will be feted at the annual ACC Legends Brunch, which will be held Saturday, March 13, beginning at 10 a.m. at the Sheraton Four Seasons Hotel, and, later that day, will be introduced to the Greensboro Coliseum crowd at halftime of the first semifinal game.

LEGENDS BRUNCH
The Legends will be honored at this year’s ACC Men’s Basketball Tournament in Greensboro at the annual ACC Basketball Legends Brunch, which will be held on Saturday, March 13 beginning at 10 a.m. Hosted by television personalities Tim Brant and Mike Hogewood, the ACC Men’s Basketball Legends Brunch will be held in the in the Guilford Ballroom of the Sheraton Four Seasons Hotel. Tickets, priced at $35 each and tables of ten for $350 each. In formation on purchasing tickets may be obtained by going to the official ACC website—TheACC.com.

Monroe (1988-91), the all-time leading scorer in NC State history with 2,551 career points, led the ACC in scoring in 1991, averaging 27.0 points per game. The 6-3 wing guard averaged over 20 points per game in three of his four seasons with the Wolfpack, averaging 21.4 as a sophomore and 23.2 as a junior. He was named first-team All-ACC in 1989 and 1991 and was a second-round pick in 1990. Tabbed a first-team All-America in 1991 by The Sporting News, he was a 2nd-team selection that year by both the NABC and UPI. Monroe still ranks 5th on the ACC’s all-time scoring list and is 2nd in career three-point field goal percentage (.436). Monroe currently resides in Huntersville, N. C.

Perkins (1981-84), a multi-talented pivotman who was a dominant player on both ends of the floor, earned first-team All-America honors three times in 1982, 1983 and 1984. He helped lead the Tar Heels to four NCAA Tournament appearances, two ACC Championships, two NCAA Final Four appearances, the 1982 National Championship and an overall 117-21 record. He finished his career as UNC’s all-time leading rebounder (1,167) and second-leading scorer (2,145) and still ranks third on the all-time UNC scoring list. The runner-up to teammate Michael Jordan for 1984 ACC Player of the Year honors, Perkins went on to earn a gold medal as part of the 1984 U.S. Olympic Team. A first-round draft pick of the Dallas Mavericks in the 1984 NBA Draft, he played in the NBA for 17 seasons for Dallas, the Los Angeles Lakers, Seattle and Indianapolis, scoring 15,324 points in his career. Perkins currently resides in Indianapolis, Ind.

Marin (1964-66), a versatile small forward, was named a first-team All-America in 1966 and the runner-up to teammate Steve Vacendak as the ACC’s Player of the Year. He was a two-time first-team All-ACC honor in 1965 and 1966 and earned 2nd-team All-ACC Tournament honors in the same years as he helped lead the Vic Bubas-coached Blue Devils to three consecutive first-place regular season finishes, ACC Championships in 1964 and 1966, as well as NCAA Final Four appearances in both years, and an overall 72-14 record. An excellent student, he was named to the 1966 Academic All-ACC squad. Chosen in the first round by the Baltimore Bullets of the National Basketball Association in 1966, he went on to an 11-year NBA career during in which he averaged 14.9 points in 849 career games, scoring 12,541 career points and averaged a career-best 22.9 points a game in 1971-72. Twice named an NBA all-star, Marin played for the Bullets, Houston, Buffalo and Chicago. He also earned selection to the NBA All-Rookie team in 1967. Marin currently lives in Durham, N. C.

Driscoll (1967-69), a 6-7 forward, still holds the career record for best rebounding average at Boston College, averaging 13.9 rebounds a game. Playing for the legendary Bob Cousy, he helped the Eagles to NCAA Tournament berths in 1967 and 1968 and to the championship game of the 1969 NIT and an overall 64-15 record. Driscoll was named a third-team All-America by the NABC in 1969 and was an NABC All-District selection in 1968 and 1969. As a senior, he averaged 23.3 points and 17.8 rebounds per game and still has three of the top 10 rebounding seasons in BC history to his credit. Drafted in the first round of the 1969 NBA Draft by the Detroit Pistons, he played six years professionally, including one season in the ABA. He currently resides in Williamsburg, Va.

Davis (1988-91), a 6-9 power forward is one of just five players in ACC history who have accumulated 1,500 points, 1,200 rebounds and 200 blocked shots in a career, joining such luminaries as Wake Forest’s Tim Duncan, Virginia’s Ralph Sampson and Duke’s Mike Gminski and Shelden Williams. A first-team All-ACC selection in 1990 and a 2nd-team honoree in 1991, he is one of two players (Duncan) who have led the ACC in rebounding in three straight years (1989-91) since 1972. He is also the only player in ACC history to lead the conference in rebounding and field goal percentage in consecutive seasons. Davis still ranks ninth in ACC history in rebounding (1,216) and 16th in field goal percentage (.588). A first-round draft pick by the Indianapolis Pacers in 1991, he enjoyed a 16-year career in the NBA with the Pacers, Portland, Golden State and Detroit making one appearance in the NBA All-Star game (2000). Davis currently lives in Smyrna, Ga.

Petty (1971-73), despite standing only 5-7, was one of the most exciting playmakers in college basketball. During his three-year career he set a Florida State career record for assists, dishing out 602, including a single-season 227 in 1971. He also set the FSU single-game assist record that season with 16 against South Alabama. An excellent defender as well, he helped lead the Seminoles of Coach Hugh Durham to the NCAA Championship Game in 1972, where they lost to national champion UCLA. During his three seasons as FSU’s point guard, Petty helped FSU claim a 62-23 overall record, while he averaged 7.4 points and 7.3 assists per game. Petty currently lives in his hometown of Louisville, Ky.

Dalrymple (1984-87), the 1984 ACC Rookie of the Year for Georgia Tech, was one of the top rebounding guards in ACC history and was one of the key performers on Tech’s 1985 ACC Championship team. He was the first player in ACC history (and now just one of four) to record over 1,500 points (1,588), 700 rebounds (744), 400 assists (446) and 200 steals (227) in a career. He is also one of just 19 players in ACC history who have recorded a triple-double. A second-team All-ACC pick in 1986 by the Associated Press, Dalrymple was a first-team All-ACC Tournament selection in 1985 as he helped lead Tech to its first ACC title. He still ranks 10th on Tech’s career lists for rebounds, ninth in assists and in minutes played, 14th in scoring and second in steals. During his career, he led the Jackets to three NCAA Tournament appearances and one in the NIT and an overall record of 88-39. Dalrymple lives in McDonough, Ga., a suburb of Atlanta.

Booth (1994-97), a third-team All-America selection in 1997 by both the Associated Press and the NABC, helped lead the Terrapins to an 82-44 four-year record and four NCAA Tournament appearances. Booth is still ranked ninth on the Maryland career scoring list with 1,776 points, sixth in rebounds and sixth in steals. He earned first-team All-ACC accolades in 1997 and third-team honors in 1995 and was a second-team All-ACC Tournament pick in 1997. A first-round draft pick by the Chicago Bulls in the 1997 NBA Draft, he played for the Bulls in 1998 when they captured the NBA World Championship. He rejoined Maryland as an assistant for Head Coach Gary Williams for the 2004-05 season and is in the midst of his fifth season as a Terrapin assistant coach and resides in College Park, Md.

Deane (1994-97), was a four-year starter at point guard for Virginia under then-head coach Jeff Jones and helped lead the Cavaliers to three NCAA Tournament appearances and an overall, four-year record of 73-50. Deane earned some kind of All-ACC recognition in each of his four seasons, being named second-team All-ACC in 1995 and 1996, receiving third-team honors in 1997, and in 1994 he was named to the ACC All-Freshman team. Deane is currently ranked ninth on Virginia’s career scoring list with 1,763 points, second in three-point field goals (237), sixth in assists (468) as well as fifth in free throws made (546) and steals (179). Deane currently lives in Petersburg, Va.

Smith (1958-61), was one of the dominant post players of his era and even today, many believe he was one of the greatest players in Virginia Tech history. A three-time, first team (1959-60-61) selection to the All-Southern Conference basketball team, Smith still holds most of Virginia Tech’s rebounding records including for a game (36), season (495 in 1959-60 in 26 games) and career (1,508) as well as for highest average in a season (20.4 in 1958-59) and career (17.1). He ranked 3rd nationally as a sophomore, 5th as a junior and 10th as a senior. Almost a half century later, he still ranks 24th on the NCAA career rebounding list and 13th on the Tech career scoring list, averaging 18.6 points. In 1959-60, he led Tech in scoring, rebounding, field goal percentage and free throws made. He was named to the Southern Conference all-tournament first team in 1960 and to the second team in 1959 and 1961. Playing for then Head Coach Chuck Noe at Tech, Smith helped the Hokies to a four-year record of 62-26. A second round selection by Syracuse in the 1961 NBA Draft, Smith passed on a professional basketball career to start his own career in business. He currently lives in his hometown of Charleston, W.Va.

Wiedeman (1961-63), was one of the backcourt standouts for the legendary Wake Forest Head Coach Horace “Bones” McKinney during the early 1960s. Wiedeman, a first-team All-ACC choice in 1963 and a second-team selection in 1962, helped lead the Deacons to a four-year record of 57-30, including a 34-8 mark in ACC play as Wake Forest captured ACC Championships in 1961 and 1962 and reached the Tournament finals in 1963. In 1962, Wake Forest reached the NCAA Final Four, defeating UCLA for third place. Wiedeman was named to the ACC All-Tournament first team in 1963 and to the second team in 1961 and 1962. He was named co-MVP of the Deacons in 1962 and MVP of the 1963 squad. Wiedeman now resides in Haddonfield, N.J.