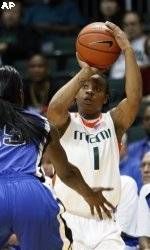 CORAL GABLES – The University of Miami women’s basketball team will face its Atlantic Coast Conference foe, the Virginia Tech Hokies at the BankUnited Center on Sunday, Jan 24.  Tip-off is set for 2 p.m.

Miami’s season of big wins continued this past Thursday night. The ‘Canes traveled to take on Maryland and

behind Riquna Williams’ big last minute three pointers and Shenise Johnson’s 17 points, snapped the Terrapins 48-game home winning streak. The streak was the second longest active streak in the nation, behind only Connecticut’s.

With the win, the Hurricanes surpassed their win total from a season ago and gained their second ACC win of the season. In each of the last three seasons, Miami has only won two ACC games per year. The ‘Canes head into their game against Virginia Tech with the second and third-most prolific scorers in the conference with Williams (21.2 ppg) and Johnson (18.0 ppg) and average 78.1 points per game, second-best in the ACC.

A Look at the Hokies

Virginia Tech holds a 1-3 record inside conference play with an upset win over North Carolina on Jan. 14. Its

ACC losses have come to Wake Forest, Virginia and Duke.

The Hokies are led by Lindsay Biggs who is averaging 11.5 points per game. Utahya Drye and Alyssa Fenyn average 11.3 and 9.1 points per game respectively. Drye also leads the team with 6.7 rebounds per game.

In 11 games, Miami holds a 6-5 edge over Virginia Tech. Last year in Blacksburg, Va. the ‘Canes pulled out a 59-56 win over the Hokies. Shenise Johnson scored 11 points and Briyana Blair added eight in the victory.