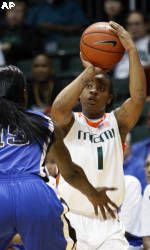 COLLEGE PARK, Md. – The significance of the stunning victory was not lost on Miami coach Katie Meier, whose team had just ended Maryland’s 48-game home winning streak in dramatic fashion.

“This isn’t a big win unless Maryland’s Maryland,” Meier said. “We absolutely know what kind of program this is, and we have a ton of respect for that home winning streak. I’m honored that we were the team that snapped it.”

Riquna Williams made two 3-pointers in the final minute, including the game-winner with 2.4 seconds left, to give the Hurricanes an 80-77 victory Thursday night. It marked the first time Maryland lost at Comcast Center since falling to Duke on Feb. 18, 2007.

“Every streak is going to come to an end at some point,” Terps coach Brenda Frese said. “But I’m proud of what we’ve created here. … Now it’s time for this team to make a new streak.”

Williams, the leading scorer in the Atlantic Coast Conference, tied the game with a 3-pointer as the shot clock expired with 48 seconds remaining.

“It was, get the ball off,” Williams said.

“That one saved us,” Meier noted.

Then, after a Maryland miss, the 5-foot-8 sophomore guard drilled the game-winning shot.

“I was coming off a screen, I had already made up my mind I was going to shoot it,” Williams said.

Johnson took over for took over for the `Canes to start the second half, scoring her team’s first six points in the period. The All-America candidate led Miami with nine rebounds, four steals and three assists.

With eight minutes to go in the game, freshman Shanel Williams checked in, resulting with Johnson and four freshmen on the court for the Hurricanes. For over two minutes, the youthful lineup extended the lead to four after a put back by Hannah Shaw. The 6-4 Brit was fouled on the play and nailed the free throw, putting the `Canes on top 69-65.

Maryland had one final chance to draw even, but a 3-point try by Kim Rodgers fell way short of the rim.

Miami held the Terrapins scoreless for nearly five minutes to start the game.

“Nobody’s going to feel sorry for us,” Frese said. “You have to be able to move on.”

Neither team led by more than three points in the second half until Stefanie Yderstrom hit a 3-pointer to put Miami up 56-52 with 10:13 to go. Maryland then got a basket from Tianna Hawkins and added four straight foul shots to move back in front.

The lead went back and forth to the finish.

Maryland started 0-for-7 with four turnovers and fell behind 10-0 before Bjork hit a 3-pointer with 14:19 left in the first half. Two minutes later, Williams connected from beyond the arc to spark a 13-7 spurt run that made it 27-12.

The `Canes will return to the BankUnited Center to face Virginia Tech on Sunday, Jan. 24 at 2 p.m.