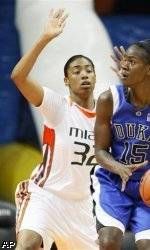 Hurricanes Fall to Duke in Battle of Ranked Teams

CORAL GABLES – Shenise Johnson led the No. 25 University of Miami women’s basketball team, but the Hurricanes (14-2, 1-1) fell to the No. 7 Duke Blue Devils, 69-62 Thursday night at the BankUnited Center.

Reserve Krystal Thomas had 15 points and 12 rebounds for Duke and the visitors remained perfect in the Atlantic Coast Conference with the win.

Jasmine Thomas was only 4 of 19 from the field but scored 16 points for Duke (15-2, 3-0), which got a three-point play from Krystal Thomas with 2:06 left to take a seven-point lead. Karima Christmas added 12 points and Bridgette Mitchell scored 10 for the Blue Devils.

Morgan Stroman scored 15 points for the Hurricanes, while ACC scoring leader Riquna Williams was held to 10 points on 4-of-23 shooting.

With 30 seconds remaining in the game and Miami trailing by only three, Duke’s Jasmine Thomas was fouled on a 15-foot jumper and sealed the contest, hitting both of her free throws.

The Hurricanes led for most of the first half and got within 63-60 on Stroman’s layup with 55 seconds to play, but no closer in the final minute and finished shooting only 33 percent. Miami fell to 0-7 all-time against Duke — the alma mater of Hurricanes coach Katie Meier.

Williams came in averaging 22.4 points per game, then opened Thursday by making three of her first six shots to help stake the Hurricanes to an early lead.

And then Duke did what hardly any Miami opponent has done this season — cool her off.

Williams missed her next 12 shots over a 21-minute stretch, but the Hurricanes found a way to stay with Duke. Thomas hit a 3-pointer with 11 1/2 minutes left to give the Blue Devils a 48-39 lead, only to have Miami immediately answer with seven straight points.

Duke led for only 2:26 of the first half, yet took a 28-26 halftime lead on Christmas’ tiebreaking layup with 10 seconds remaining.

Miami led by as many as nine points in the opening minutes, an 11-2 run over 5:13 putting the Hurricanes up 20-11 with 8:21 remaining before halftime. But the Hurricanes missed 11 of their final 14 shots of the half, opening the door for Duke to take the lead with a 17-6 run.

The Hurricanes continue ACC play when they head to the road and face the Wake Forest Demon Deacons in Winston-Salem, N.C. on Sunday, Jan. 17 at 2 p.m. Miami then will face Maryland at the Comcast Center in College Park, Md. On Thursday, Jan 21. The ‘Canes will return to the BankUnited Center to face Virginia Tech on Sunday, Jan. 24 at 2 p.m.