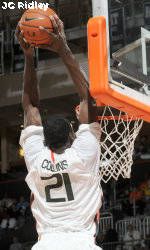 CORAL GABLES, FLA. – After knocking off Wake Forest for its seventh-straight win, the University of Miami men’s basketball team is No. 23 in the Associated Press Top 25 Poll this week.

The Hurricanes, who improved to 15-1 overall and 1-1 in the Atlantic Coast Conference with Saturday’s victory over the Demon Deacons, are ranked for the first time this season. The last time Miami was in the polls was on Dec. 1, 2008, when the Hurricanes were No. 21 in the AP Poll and No. 22 in the ESPN/USA Today Coaches Poll.

UM earned eight votes in the Coaches Poll this week.

“I’m happy for my guys, that they have earned the recognition for all the hard work they’ve put into this season,” said sixth-year head coach Frank Haith, who has had the Hurricanes nationally ranked in three-straight seasons for the first time in school history. “But they understand we still have a lot of work left to do.

“We’re making good progress and we’re pleased with how we’ve handled the season so far, but we’re not where we want to be yet. We’re a young team, and we still have a lot left to accomplish.”