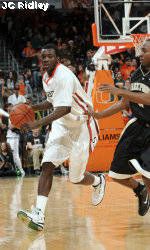 CORAL GABLES, Fla… University of Miami freshman guard Durand Scott has been selected ACC Rookie of the Week for the third time this season.

The 6-3 freshman from New York City had 10 points, three assists, two rebounds and a steal to help Miami win its seventh-straight game and get off to its best start in 50 years with a 67-66 win over Wake Forest on Saturday.

Scott scored eight of his 10 points in the second half – including hitting a pivotal jumper with 4:06 to go to put the Hurricanes back in the lead 63-62. It was his sixth double-figure scoring effort of the season.

He leads all ACC freshmen and ranks seventh overall in assists per game (4.4) and is third in assists-to-turnover ratio (2.15:1) behind a pair of seniors.

Georgia Tech’s Gani Lawal was named ACC Player of the Week after posting 21 points in each of the team’s two games last week, including Saturday’s upset of Duke.