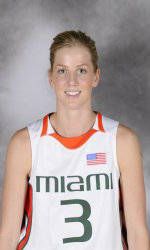 CORAL GABLES – Despite a late-game rally, the University of Miami (7-1) women’s basketball team lost its first game of the season, 76-71, to the Nebraska Cornhuskers (8-0) at the BankUnited Center on Saturday afternoon.

Four different Hurricanes scored in double-figures, including a game-high 18 from the Atlantic Coast Conference leading scorer – Riquna Williams, but Miami was unable to overcome 17 second-half turnovers.

Miami trailed by 11 points with 2:54 left and soon after lost both Williams and Shenise Johnson to fouls. However, the `Canes kept Nebraska from inbounding the ball cleanly and forced four turnovers in the final minutes. That along with five Stefanie Yderstrom points and scores from Charmaine Clark, Miami found themselves down only three with 32 seconds to go.

Unfortunately, UM turned the ball over on its next possession and Nebraska was able to seal the game with two Dominque Kelley free-throws.

In only her second collegiate game, Yderstrom scored 15 points on 6-of-10 shooting. Johnson scored 12, while Clark added 10 points and contributed a team-high seven assists.

Freshman Morgan Stroman came off the bench and tied for the team-lead with six rebounds, matching Sylvia Bullock.

The Hurricanes came into the contest hitting 6.7 three-pointers per contest but only hit two on Saturday. One of the differences in the game was that Cornhuskers hit nine treys, three from Yvonne Turner. Kelley led five Nebraska players in double-figures with 16 points.

The Cornhuskers led by as many as eight points halfway through the first-half but Miami fought back and trailed by only one at 35-34 after a Charmaine Clark layup with 2:23 remaining. Nebraska scored on a Kelley three-pointer on the Huskers next possession.

After Stroman hit two free-throws, Nebraska’s star center Kelsey Griffin was called for a charge – her third foul of the game – with just four seconds in the half. Miami’s Williams led all scorers with nine points at the break and the Huskers led 38-36.

Griffin sat the beginning of the second-half, but still ended the game with 13 points and a game-high nine rebounds.

The Hurricanes have a two-week break between games, before traveling to Upstate New York to take on Binghamton and Cornell on December 19 and 21 respectively.

Miami returns to the BankUnited Center when it hosts the Wyndham Miami Holiday Tournament December 28-29. This year’s participants in the 13th annual tournament will be Quinnipiac, Central Michigan and No. 17 Texas. The `Canes will face Quinnipiac in the opening round on Monday, December 28.