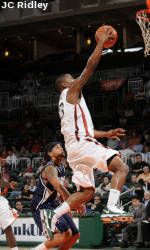 Collins was selected as the MVP of the tournament.

Dews finished the night shooting a perfect 3-of-3 from long range, moving into Miami’s top 10 all-time in career three-pointers, having made 126 in his career. Tonight, he moved past James Jones (1999-2003) for sole possession of 10th place.

He would finish the night with a career-high 22 points.

Miami outrebounded South Carolina 30-16 in the first half.

The Gamecocks played without forward Dominique Archie for most of the game. Archie injured his right knee and left the game with 13:29 to play in the first half and South Carolina leading 9-2. He did not return.

Miami reached the championship game by beating Tulane 74-54 in the opening round and North Carolina-Wilmington 67-60 in the second round.