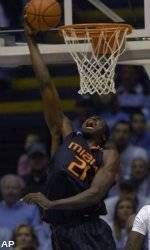 CHARLESTON, S.C. (AP) -Dwayne Collins had 22 points and 14 rebounds for his 15th career double-double as Miami overpowered Tulane, 74-54, Thursday in the first round of the Charleston Classic.

Collins made all eight of his shots from the field — a Miami program best, and eight of his rebounds came on the offensive end.

“He played like a man today,” Miami coach Frank Haith said. “It was a really good effort. We shared the ball, had 19 assists, and I thought our defense exerted itself in the second half, and we got on the offensive glass.”

Collins was miffed that he made only six of 11 foul shots.

“I was disappointed I didn’t shoot better from the free throw line,” the power forward said. “Other than that, I guess I’ll take it. I thought we played well as a team, especially on defense.”

The Hurricanes (3-0) broke away early in the second half with a 19-4 run. They advanced to play the Penn State-UNC Wilmington winner.

Miami held Tulane to 20 points in the second half, limiting the Green Wave to 30 percent shooting.

“Our thought our defense was the key to the game,” Haith said. “We were able to switch up between zone and man and our press, and I thought we played with a lot of energy.”