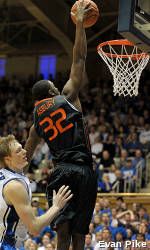 Asbury will begin the season in the Second Division on the Tivon roster, but will practice with Maccabi Haifa – an Israeli Premier League team – during the season and can be called up to that squad.

“We are proud to sign a local Miami player like Brian out of our U.S. tryout,” said Maccabi Haifa owner Jeffrey Rosen. “Since the team’s parent company, Triangle [Financial Services], is based in South Florida we are always scouting for local talent. We look forward to Brian gaining experience in the Second Division with Tivon in hopes to help Haifa down the stretch.”

A four-year letterwinner for the Hurricanes, Asbury set a Miami record with 130 career appearances and averaged 8.0 points and 5.0 rebounds per game as a senior with 19 starts in 32 games. Versus ACC competition, Asbury was UM’s second-leading scorer with 9.8 points and 5.4 rebounds per game.

Asbury, who received the Ultimate Teammate Award following the 2008-09 season in a vote by his fellow Miami players, impressed team management after tryouts at Nova Southeastern University on July 28 and 29, where 48 players competed for an opportunity to play professional basketball in Israel.