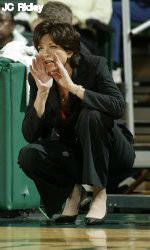 CORAL GABLES – The University of Miami women’s basketball coach Katie Meier has announced that Shanel Williams has signed a National Letter of Intent to play for the Hurricanes beginning in the 2009-10 season.

Williams a native of Chesapeake, Va. led her Indian River High School team to an 89-20 record in her four-year career. The powerful guard, whose explosiveness allows her to get through the lane and get to basket, helped her to 14.8 points per game her senior season.

“Shanel was a great find for my staff. She has the type of game which flourishes in our style of play and is just a super person who takes care of business on the court and in the classroom,” said Meier.

Williams also posses an accurate mid-range jump shot which will fit in nicely with the `Canes style of play. The 5-7 Williams, also pulled down eight rebounds while dishing out five assists and 3.5 steals per contest.

As a member of her Lady Wolves club team, Williams led them to six-consecutive AAU and USSSA state championships.

“She’s another player in the mold of our versatile, athletic and slashing guards who hit the boards hard and bring defensive intensity. We are thrilled to welcome her to the `U’ family,” added Meier.

Williams joins a 2009-10 class that is highlighted by McDonald’s All-American Morgan Stroman. Stroman led her Lower Richland High School team to four-straight South Carolina State Championships and was named the state’s Gatorade Player of the Year her sophomore through senior seasons.