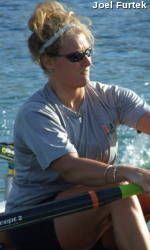 Greensboro, N.C. – With three victories last week, the University of Miami first varsity eight boat was honored on Thursday morning as the Atlantic Coast Conference’s (ACC) initial 2009 Crew of the Week, released by the conference office in Greensboro, N.C.

“I’m really proud of how hard our entire team has worked the past few weeks,” expressed UM head coach Robbie Tenenbaum. “Everybody has been pushing everybody, which has really helped to push the first eight to a new level.”

The Hurricanes defeated Dowling, the nation’s 2nd-ranked Division II first varsity eight boat, and Rochester, on March 11, recording a time of 6:52.06. Miami came back one day later to best Connecticut, turning in a 6:50.10 performance to the Huskies’ 7:02.08. Miami captured three of four events against Conn, dropping only the Novice Eight competition.

The Hurricanes edged out the first varsity boat of 13th-ranked Clemson this week, as the Tigers downed Penn and Alabama in a meet at Lake Hartwell in Clemson, S.C.

“We’re finishing up a tough week of workouts during our spring break preparing rigorously for some of the best teams in the country that we’ll see at the San Diego Crew Classic,” continued Tenenbaum, now in his second year at the helm of the UM rowing team.

The `Canes will have almost a month to prepare for their next regatta, taking part in the annual San Diego Crew Classic on Apr. 4-5 in California.