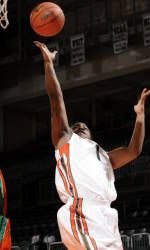 Freshman Riquna Williams continued her hot streak as she poured in a new career-high with 23 points in her first conference action. However, the Hurricanes hit a dry spell midway through the second half. Over a span of six minutes and ten seconds, Clemson went on a 22-2 run, erasing Miami’s double-digit lead and giving itself a lead of seven.

Williams was joined by fellow freshman Shenise Johnson as the only two Miami players to score in double-figures. Johnson, who was named the ACC’s Rookie of the Week for the second time earlier in the day, scored 16 points and was tied for the team lead with seven rebounds.

The first half was played at a very fast pace and each team made mini-runs throughout, as there were nine lead changes. Johnson and Williams both had already scored in double-figures before the break with 11 and 10 points respectively and the Hurricanes held a 41-38 lead.

The second half started well for the home team as they extended their lead to a game-high 13 points at 55-42 with 9:38 to go in the game. That’s when the Tigers made their run and shut the door on Miami.

Three different Clemson players scored in double-figures, led by Shaniqua Pauldo, who came off the bench to score 15. Sthefany Thomas added 14 points and the ACC’s second leading scorer, Lele Hardy was held to 13 points. However, Hardy recorded her fifth double-double of the season as she grabbed a game-high 15 rebounds.

Miami will head on the road for its next contest when they face No. 5/11 Duke at Cameron Indoor Stadium, Friday, Jan. 9 at 7 p.m. The Hurricanes return to the BankUnited Center on Monday, Jan. 12 as they face No. 22/24 Georgia Tech at 7 p.m. The game will be televised on FSN Florida. For ticket information, please call 1-800-Go-Canes or visit hurricanesports.com.