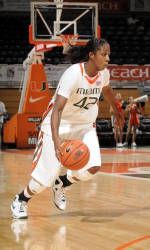 Hurricanes Fall in Tight Battle Against No. 9 Auburn

Bonner had 18 points and 8 rebounds, Alli Smalley scored 16, and Whitney Boddie had 9 points, 9 rebounds and 8 assists in the championship game for Auburn (14-0). Boddie, a senior, was also named the tournament MVP.

“I thought [Boddie] played a great two days of basketball,” Auburn coach Nell Fortner said. “She is playing with a lot of confidence and she understands her teammates. Her and Alli have that back door working and she has it with Hobbs, too – she understands their game.”

Boddie often found Smalley outside the perimeter and gave Miami (9-4) trouble with her speed – the point guard also had five steals.

At first, though, Auburn was too small against the Hurricanes’ lineup. Smalley, who is 5-foot-8, was often defending Miami’s Latoya Drake or Shenise Johnson. Drake is 6-foot-2 and Johnson, who led Miami in scoring with 21 points, is 5-foot-11.

“They had a bigger lineup and we were small,” Fortner said. “Then I subbed Keke [Carrier] back in the game and we just got a little bigger.”

Along with Bonner and Smalley, Carrier scored in double digits. The 6-foot-7 junior finished with 14 points in 15 minutes.

So did a lackluster 3-point field goal percentage and a number of turnovers. Miami only shot 26.7 percent from beyond the arc and had 17 turnovers.

Auburn scored 14 points off of those miscues.

The Hurricanes kept the game close, though, in the beginning. The team led at the half by two, 32-30, behind Johnson’s 14 points.

“Number 42 – she just had a hot hand and she was just knocking down everything,” Bonner said. “Their outside shots were falling and they had a lot of confidence.”

Miami failed to follow up with a similar performance in the second. Auburn went on a 17-4 run behind three 3-pointers by Smalley and only allowed Miami within six when Miami’s Latoya Drake scored in the paint to make it 49-43.

Smalley finished 4-of-6 from behind the arc.

“I think we had a lot of mental breakdowns and I think fatigue played a lot of it,” Johnson said. Matching up against Carrier and Auburn’s bigger post players took a toll.

“I think that took a lot of our energy. We played one of our more physical games of the year but we come out at half time and we didn’t have the same energy. We hadn’t played a team like Auburn this year and it takes 40 minutes of perfection,” Meier said.