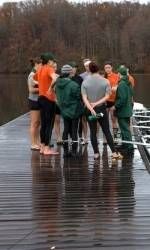 Charlottesville, Va. – The Miami Hurricanes rowing team wrapped-up their fall season on Sunday participating in the annual Rivanna Romp hosted by the University of Virginia in Charlottesville. The event took place at the Rivanna Reservoir.

In what was a particularly strong fall campaign, head coach Robbie Tenenbaum and the Hurricanes traveled to their first ACC opponent regatta of the 2008-09 campaign this weekend. The result, another solid performance by the `Canes in a well-respected annual meet.

“I am proud of how hard our team raced today,” expressed second-year head coach Tenenbaum. “The 8’s made a lot of improvements this fall. The team is looking forward to some hard training over the next few months as we prepare for our spring season.”

Miami began things off in the Varsity 8 with light winds and chilly conditions in the Virginia atmosphere. The weather was unusual for the south Florida Hurricanes who had experienced 80-90 degree temperatures for much of the past two weeks in the Miami area.

Miami came away with a very impressive performance in the Varsity 4 as the boat manned by Monika Sajincic (bow), Frida Schneider (2), Nic Saner (3), Laura Cordner (stroke) and Christina Crocco (coxswain), soared to a third place time of 15:15.47. That was a boat-best time this year, and they defeated 18 other boats in the 23-team field.

“We were especially happy with the performance of our “A” 4 boat,” stated Tenenbaum. “They had a great race today, and were able to really show off all the hard work they put in during the fall.”

“The fall season is more of a training segment for women’s rowing teams,” commented Tenenbaum shortly afterwards. “We made a lot of technical improvements, and we are looking forward to a challenging spring racing schedule.

The UM rowing team now takes some much-needed time off before setting back to the waters for what is expected to be a challenging spring season. They kick things off on Feb. 22 with a scrimmage against Michigan in Tampa, followed by the season-opener against Connecticut at home on Mar. 12.