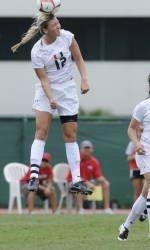 Miami Falls to No. 2 North Carolina in ACC Tournament, 1-0

CARY, N.C. – For the second time in less than a week, North Carolina found itself locked in a defensive struggle with stubborn Miami. Once again, one goal proved to be enough.

Tobin Heath scored off an assist from Meghan Klingenberg with 24:08 remaining, and top-seeded North Carolina made it stand for a 1-0 win over the eighth-seeded Hurricanes in Wednesday’s Atlantic Coast Conference Women’s Soccer Championship quarterfinal match.

North Carolina (17-1-2) moved on to Friday’s 5 p.m. semifinal game and will face the winner of Wednesday’s later game between fourth-seeded Boston College and fifth-seeded Duke.

“We beat a very good defensive team,” North Carolina coach Anson Dorrance said. “Miami makes it hard to move the ball, and their goalkeeper is superb. I pity the teams in Miami’s bracket in the NCAA Tournament. They are very tough to beat.”

Miami (10-8-3) entered the tournament having allowed one goal in its previous five matches – and that came in a 1-0 loss to the Tar Heels in last Sunday’s match that closed the regular season. Hurricanes freshman goalkeeper Vikki Alonzo, who had 14 saves in that contest, again stifled North Carolina with several clutch saves on Wednesday. The match remained scoreless until Heath delivered for the Tar Heels midway through the second half.

After taking the pass from Klingenberg, Heath maneuvered free with a one-on-one move and lined a low shot from 10 yards out past Alonzo into the right side of the net. The goal was the junior U.S. Olympian’s eighth of the year.

Miami missed a chance to tie with 7:36 to play when North Carolina goalkeeper Anna Rodenbough snared a hard liner by Beverly Goebel. Rodenbough made the save on another shot by Brittney Steinbruch with just over two minutes remaining to preserve the shut out.

“We respect Miami and the way they fight tooth and nail,” Dorrance said. “They play with their hearts.”

The Tar Heels had 22 shots on goal to Miami’s eight. Alonzo made seven saves, giving her 109 for the season.

“Overall. I was very pleased,” said Miami coach Tricia Taliaferro. “Playing North Carolina back-to-back on Sunday and then today was a difficult task. I was disappointed that they were able to get that goal when we were pressing, but overall I was pleased with our performance today.”

The shutout was the 11th of the season for North Carolina, which is bidding for its 19th ACC Championship in 21 years.