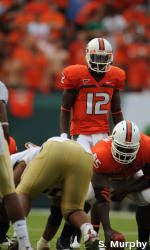 Harris threw a career-high four touchdown passes and ran for another touchdown in helping Miami to a 49-31 road win at Duke. He completed 18-of-28 passes for 185 yards and rushed 10 times for 53 yards. He was the first Miami quarterback since Kyle Wright against Wake Forest in 2005 to toss four TDs. He also was the first Hurricane since Wright – in that same Wake Forest game – to account for five touchdowns in a game. His 6-yard touchdown pass to Aldarius Johnson in the third quarter put the Hurricanes ahead for good and was one of three touchdowns he led Miami to in that quarter. His first touchdown of the quarter was a 15-yard run, which was his second career rushing TD.

Harris previously earned Rookie of the Week honors after guiding Miami to a season-opening win over Charleston Southern.