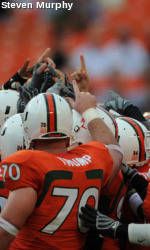 CORAL GABLES, Fla. –The Atlantic Coast Conference announced today Miami’s home game against Wake on Oct. 25 will kick off at noon from Dolphin Stadium. The game will be broadcast on ESPNU, and it will be Homecoming for the Hurricanes.

Here are the other ACC television selection:

* Regional ABC telecast, shown to other parts of the country on ESPN2