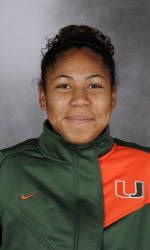 Alonzo Sets Record in Scoreless Tie Against No. 25 San Diego

LOS ANGELES – In the second game of the UCLA Women’s Cup, the 19th-ranked University of Miami (7-2-1) women’s soccer team battled the No. 25 San Diego Toreros (5-2-2) to a scoreless double overtime tie Sunday afternoon.

Freshman goalkeeper Vikki Alonzo recorded a season-high 11 saves on the day, in recording her seventh shutout in only her 10th career game. With the performance, Alonzo passed Lauren McAdam in the Miami record book for shutouts in a season.

They may have been outshot 22-13 but the Hurricane defense, especially the backline, stopped San Diego from getting off high percentage shots.

The best opportunities for either team came early in the first half. First, sophomore Brittney Steinbruch’s shot in the ninth minute was saved by Torero keeper Brittany Cameron. Cameron made a second big save in the 26th minute, this time off the foot of freshman Ashlee Burt.

“I am proud of our team, responding against one of the most athletic teams we have faced, especially after a tough loss on Friday,” said head coach Tricia Taliaferro.

Steinbruch led Miami with seven shots on the day, two on goal. Both of Burt’s shots were on goal, in the first overtime game of the season for the Hurricanes.

Miami returns to Cobb Stadium as they face the Virginia Tech Hokies in the ACC opener, Thursday, Sept. 25 at 7 p.m.