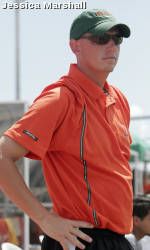 CORAL GABLES – University of Miami head women’s soccer coach Tricia Taliaferro has announced the Jeff Freeman has been named associate head coach. Freeman enters his fifth season with the team and has been crucial to the development of the Miami program.

“There is no one that is more deserving of this promotion than Jeff,” said Taliaferro. “I am extremely thankful for his loyalty and dedication and this program has been blessed to have someone with his experience and knowledge on the staff.”

Freeman came to Miami after a four-year stint as the assistant coach of his alma mater, Missouri State. The Blue Springs, Mo. Native was an all-conference goalkeeper for the Bears and was a member of the 1997 team that advanced to the NCAA Tournament.

“I am extremely grateful to head coach Tricia Taliaferro and our administration at the University of Miami for both the opportunity to coach at Miami, and now to be promoted as associate head coach,” said Freeman. “Over the past five years we have built a solid foundation and I could not be more excited about what this season and the future of Miami soccer will bring us for years to come.”

The Hurricanes are currently 5-0 on the season, matching the best start in school history and are coming off a season where they advanced to the NCAA Tournament for the second time and first since 2001.