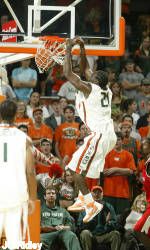 CORAL GABLES, Fla. – ESPNU has picked up three University of Miami men’s basketball games, increasing the team’s number of nationally-televised games to at least 10, with seven games broadcast on the ESPN family of channels and three on Fox Sports Net.

ESPNU will air three ACC road games for the Hurricanes, beginning with a Jan. 10 tilt at Boston College.  ESNPU will also carry Miami at NC State on Jan. 27 – moved up one day to accommodate the broadcast – and the Hurricanes at in-state rival Florida State on Feb. 18. Coverage for all three games will begin at 7 p.m.

ESPN will televise three Miami games, including back-to-back appearances in December. ESPN will broadcast the ACC/Big Ten Challenge match between the Hurricanes and Ohio State at the BankUnited Center on Dec. 2 at 7 p.m., followed by Miami at Kentucky on Dec. 6 at 5:30 p.m. UM’s game at North Carolina on Jan. 17 will be shown live on ESPN at 9 p.m., while the Miami-Wake Forest contest in Coral Gables on Feb. 4 will be broadcast on ESPN2 at 7:30 p.m.

Fifth-year head coach Frank Haith and the Hurricanes, who went 23-11 last season and advanced to the second round of the NCAA Tournament, open their 29-game slate at home on Sat., Nov. 15 versus Florida Southern at 7:30 p.m.