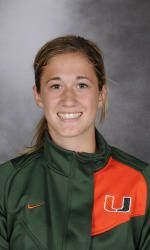 The Hurricanes scored their first goal of the match in the 41st minute when junior forward Paulelette Ricks-Chambers raced down the left side a fired a shot that deflected off the diving FIU keeper and right onto the foot of the opportunistic Rickers, who tapped it into the net.

On her first collegiate goal, Rickers said, “It was just a follow-up on a great shot from Paulelette. The whole game we created a lot of opportunities for ourselves, and I was happy that I was in the right place.”

The freshman wasn’t the only one that made a difference in the first half. Lauren Singer just missed on a scoring chance just a few minutes into the match, as her first shot bounced off the left post and moments later she blasted a shot that was desperately grabbed by the keeper. Singer led the Hurricanes with eight shots on the night, five on goal.

The offensive intensity saw the home team hold a 16-4 advantage in shots heading into halftime.

Steinbruch scored the eventual game-winner 15 minutes into the second half, when she benefited on a pass from Ashlee Burt. Burt, another freshman, showed fancy footwork on the right sideline, shaking off two defenders, before finding Steinbruch in the middle of the field. Steinbruch launched her shot from 20 yards out, before it deflected off a defender and into the right side of the goal.

Miami’s defense played great throughout, as they only needed Vikki Alonzo to make five saves on the night.

“We played well tonight, our number were good and our energy was where it needed to be,” said head coach Tricia Taliaferro. “Rickers was the star of the game tonight, and Katie Oddo played great in her first appearance of the season.”

FIU’s lone goal came in the 87th minute when Marina Pappas shot rebounded off Alonzo and was lost in a mob of players in front of the fallen keeper. Deana Rossi somehow found the loose ball, putting the Golden Panthers on the board.

“I have to give (FIU head Coach) Thomas Chestnutt a lot of credit, you can see how much of a difference his presence has made to FIU,” said Taliaferro. “We had to fight for everything we got tonight. They (FIU) made it very hard to get a rhythm out there.”

Overall, Miami outshot FIU 25-9 and controlled tempo throughout despite getting called for 15 fouls to only five for the visitors.

The Hurricanes now focus on Florida Atlantic, who visit Cobb Stadium this Sunday, Aug. 31 at 1p.m. Tickets will be on sale, $3 for children and $5 for adults.