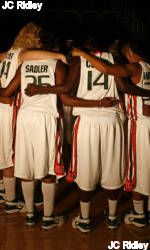 Earlier this year, Johnson played in the WBCA All-American Game presented by Nike and the McDonald’s All-American game in Milwaukee.

Johnson will be one of 35 prep student-athletes vying for only 12 slots on the U18 team and an opportunity to play in the FIBA Americas U18 Championship.

The FIBA Americas U18 Championship for Women will feature eight national teams from North, South and Central America and the Caribbean from July 23-27 in Buenos Aires, Argentina. The top four finishing teams qualify for the 2009 FIBA U19 Women’s World Championship, which will be held July 23-Aug. 2 in Bangkok, Thailand.

In the preliminary round, the eight participating teams will be divided into two groups of four teams each. After playing the three other teams in the preliminary round, the top two finishing teams from each group will advance to the medal round semifinals, while the third and fourth place finishing teams will meet in the consolation round semifinals. The gold medal, bronze medal, 5th/6th place and 7th/8th place games will be played on July 27.

Slam Magazine currently ranks Johnson as the no. 11 prospect in the nation and the best in the northeast.  The 5-11 forward out of Henrietta, N.Y. led her team to its third-straight state championship in 2008.