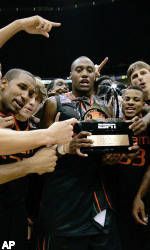 The Hurricanes, ranked as high as No. 12 in various preseason media polls, is joined by Connecticut, Wisconsin, San Diego, Southern Miss, La Salle, Valparaiso and Iona in the impressive eight-team field. Both Miami and San Diego reached the second round of the NCAA Tournament last season, while Wisconsin advanced to the NCAA’s Sweet Sixteen and UConn bowed out after a first-round loss to San Diego. Connecticut has been ranked in the top 10 in a pair of preseason polls, while Wisconsin has been listed among the top 25.

“This is going to be one of the best – if not the best – early-season tournaments in 2008,” said head Miami coach Frank Haith, who will be embarking on his fifth year at the helm. “The quality of this field in this is just tremendous. It is definitely going to be a challenge, but our squad is accustomed to playing the best opponents in the country and this will be a great tune-up for us before entering ACC play.”

First-round winners will have a one-day bye from competition and then meet on Sun., Nov. 23, while the losing teams will play on Sat., Nov. 22. All third-round contests are scheduled for Mon., Nov. 24, with the title game to tip at 8:30 p.m.