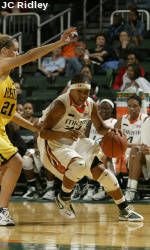 CORAL GABLES – The <?xml:namespace prefix=”st1″ ns=”urn:schemas-microsoft-com:office:smarttags”?>University of Miami women’s basketball team will play host to Indiana in the 2008 ACC/Big Ten Challenge on Fri., Dec. 5, at the BankUnitedCenter.  The time has yet to be determined.<?xml:namespace prefix=”o” ns=”urn:schemas-microsoft-com:office:office”?>

“This is a great event for both the ACC and the Big Ten,” said head coach Katie Meier.  “We are thrilled to bring the ACC/Big Challenge back to the BankUnitedCenter.  The high level of competition and the exciting brand of basketball that both the Hoosiers and our team play will be entertaining for our fans.”

The Hurricanes lead the Hoosiers in the all-time series, 1-0, after defeating IU, 79-70, in the championship game of the UM Thanksgiving Tournament on Nov. 26, 2006, in Coral Gables.

Meier added, “This will be a special opportunity, early in the season for our team to be challenged and tested.”

Last season, Miami hosted Michigan in the inaugural event, at the BankUnitedCenter.