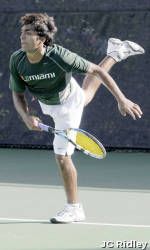 No. 19 Men's Tennis Faces USF in NCAA First Round

Coral Gables, Fla… The No. 19 University of Miami men’s tennis team will face No. 42 USF in the first round of the NCAA Tournament on Sat., May 10, at 1 p.m. at the University of Florida’s Linder Stadium at Ring Tennis Complex in Gainesville.<?xml:namespace prefix=”o” ns=”urn:schemas-microsoft-com:office:office”?>

It marks the third-straight appearance for the Hurricanes (16-7) in their fourth season under head coach Mario Rincon. Miami – who has gone 2-2 in NCAA Tournament play under Rincon – has won seven of its last eight matches, including upsetting three of the ACC’s top-four seeds in the conference tournament, before falling in the ACC Championship final to undefeated and top-ranked Virginia.

The Bulls (14-6 ), who have won two of their last three matches, advanced to the finals of the Big East Championship, going on to drop a 4-3 decision to Notre Dame.

“We are looking forward to playing USF,” said Coach Rincon. “We knew we would play someone really good in this first round, and it’s going to be two really strong, hungry teams going at it. USF is a much improved squad and they are going to present a challenge for us. But we have been a tough, competitive team on the road this year, and I expect the guys to step it up even more for the NCAA Tournament.”

Miami – who is making their 43rd NCAA Tournament appearance in the last 50 years – and USF were slated to meet in Coral Gables during the regular season on Sun., Feb, 17, however inclement weather forced the cancellation of the match. The Hurricanes lead the all-time series, 39-7, and have won four straight over the Bulls – including a 5-2 win in the teams’ last meeting on Feb. 9, 2007, on  UM’s campus.

The host Gators (15-7), seeded 10th in the NCAA Tournament and ranked ninth in the latest ITA Poll released Monday, will take on Navy (20-8) at 10 a.m. on Saturday, with the winners of both first-round matches meeting in NCAA second-round action on Sun., May 11, at 1 p.m.

The Hurricanes are led by All-American junior Daniel Vallverdu, a three-time All-ACC Men’s Tennis Team selection, who is ranked fifth in the nation in singles play (27-8) and third in doubles play alongside freshman Carl Sundberg (23-7).

Freshman Lucas Jovita, ranked 84th in the nation in singles competition, leads the Bulls. Putting together a 14-5 record in dual matches, he has become USF’s No. 1 singles player.

Miami is one of seven ACC teams to advance to the NCAA Tournament this season, joining top-seeded Virginia, North Carolina, Florida State, Duke, Virginia Tech and Wake Forest. The winner of each site advances to the NCAA Division I Men’s Tennis Championship at the MichaelD.CaseTennisCenter in Tulsa, Okla., hosted by the University of Tulsa. The team championship will be held May 16-20.

Individuals selected to compete in the singles and doubles championships will be announced by 6 p.m. on Wed., April 30, via the NCAA websites (www.NCAA.com and www.NCAA.org).