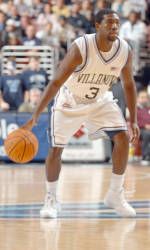 “Malcolm is going to be a great addition to our squad,” said Coach Haith. “He is an explosive player – great from long range with strong ball-handling skills. He is a tough player and will be a key component in our continued growth as a program.”

Grant provided a spark off the bench for the Wildcats and was considered a clutch three-point shooter. He was pivotal in Villanova’s 21-point comeback win over LSU on Dec. 6, scoring all 18 of his points in the final seven minutes – including 14 points in the last 2:55.