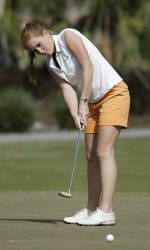 Miami Lakes, Fla – University of Miami senior Hagen Weintraub finished a team-high 11th to lead the Hurricanes at the Canes and Cardinal Classic on Tuesday at Don Shula’s Golf Resort in Miami Lakes.

She was consistent over the three rounds, shooting 73, 74 and 73 to finish her final home tournament with 220 strokes.

The Hurricanes put together their strongest showing in the third round, combining to shoot 295, as Miami finished in eighth place of 14 teams with a three-round total of 895.

Co-host Louisville led from the start, and claimed the team title with a combined 871 strokes, including the individual tournament win from Cindy LaCrosse (67-74-71=212), who finished four-under par for the tournament and four strokes ahead of the runner-ups.