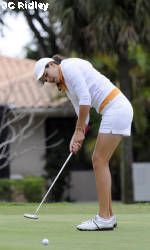 Ronderos dropped three strokes off her round-one total to fire an even-par 73 on Tuesday to tie for second place (76-73-149) – the top collegiate finish for the freshman in eight tournaments this season.

Taking the lead into Tuesday’s competition after shooting a one-under par 72, Steward finished in a tie for fourth place after shooting a 78 in the final round (72-78-150). It marked her fifth top-10 finish of the year and her third in the top five.

The Hurricanes combined to shoot 326 in each round to finish in 12th place with a team score of 652. The host Panthers defeated Jacksonville State in a one-hole playoff, as the teams each shot 613 over the two-round, 36-hole tournament.

The Hurricanes return to competition on Monday, Apr. 6, as hosts of the Canes and Cardinal Classic at Don Shula’s Golf Resort in MiamiLakes. The three-round, 54-hole tournament wraps up on Tuesday, Apr. 7.