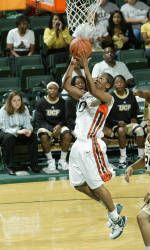 GREENSBORO, N.C. – No one had to remind favored Georgia Tech that seedings didn’t mean a lot when it came to facing Miami in the Atlantic Coast Conference Women’s Tournament.

And after taking part in two heart-stopping games against the 12th-seeded Hurricanes during the regular season, the fifth-seeded Yellow Jackets had no interest in playing a third.

Fueled by Janie Mitchell’s game-high 17 points and a season-high 15 from <?xml:namespace prefix=”st1″ ns=”urn:schemas-microsoft-com:office:smarttags”?>Jacqua Williams, Georgia Tech seized control early and cruised to a 76-49 win in Thursday’s tournament opener at the Greensboro Coliseum.

Georgia Tech needed a 3-point shot in the final second by Montgomery to claim a three-point win over Miami the first meeting between the teams in January. The Hurricanes countered with a two-point win at Miami less than a month later, with freshman point guard Epiphany Woodson’s 3-pointer in the waning moments accounting for the difference there.

“We lost the last time we played Miami, and we really felt like we let one slip away,” Georgia Tech coach MaChelle Joseph said. “I know the kids and staff were very motivated to have an opportunity to avenge
that loss, and we know how important it is for NCAA Tournament play and seedings.

“We really feel like we came out and gave a solid performance.”

Maurita Reid scored 12 points in her final college game to lead Miami (9-21), and Woodson finished with 11. The Hurricanes shot 31 percent from the floor, including a 3-of-22 showing from 3-point range, and were outrebounded 45-34.

“We’ve very disappointed in our performance,” said Miami coach Katie Meier. “I hate it for our players because we came out and just couldn’t put it in the basket. Georgia Tech challenged us and made it difficult with their defense, but at the same time I thought we had opportunities – especially in the first half – and just couldn’t knock them down.”

Georgia Tech found breathing room midway through the first half, when it used a 21-6 run to build a 17-point lead.

Williams’ traditional three-point play keyed the flurry, and Chioma Nnamaka and Montgomery connected from 3-point range as the Yellow Jackets pushed the spread to double-digits. Montgomery’s fast-break layup with 4:21 remaining in the half gave Georgia Tech a 32-15 lead.

The Yellow Jackets went on to lead 39-26 at the break. Mitchell led all first-half scorers with 11 points, and Williams scored 10.

“Georgia Tech was more aggressive today than they have been before,” Miami’s Reid said. “Their scorers came out looking to score, and players who don’t normally score for them were looking to do that as well. I think this is the best I have seen them play since I’ve been here.”

The Hurricanes found a ray hope when they scored four unanswered points to open the second half, but Mitchell’s three-point play quickly got Georgia Tech back on track. The play ignited a 15-2 run that left the
Yellow Jackets leading 54-32 with 11:59 to play.

“Being a senior and one of our go-to players, when you see things like that happening, you have to think to yourself, `Hey … we need a shot. We need to put ourselves in position to stop this run and go on our own run,'” Mitchell said. “It just so happens that I was the one who had to take the shot, and it was a big momentum builder for us.”

If last week’s regular-season finale is an indication, today’s quarterfinal matchup between Georgia Tech and Virginia could be a tournament highlight. The Cavaliers edged the Yellow Jackets 103-101 in
double-overtime last Sunday.