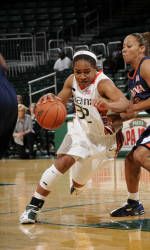 Wake Forest junior Alex Tchangoue tied a season-high with 18 points against the `Canes, including 10 in the first half.

That half didn’t start well for Miami, as the Demon Deacons scored the game’s first six points.  Maurita Reid scored the first basket for her team, 5:26 into the game.

Even though their offense struggled, The Hurricane defense came to play, holding WakeForest seven points under their season-average.  Miami stole the ball 13 times from the Demon Deacons.  Four of those steals came on WakeForest inbounds passes under the Miami basket, three by Cunningham and one by freshman Epiphany Woodson.

Woodson, a native of nearby Charlotte, N.C. struggled shooting the ball for Miami, but she played 36 minutes for Miami, the guard also led her team with seven rebounds, the most she has pulled down since the season-opener against Florida Atlantic.

Reid found herself in foul trouble for most of the game, fouling out for the second time of the season, late in the game.  Despite the foul troubles the senior guard scored a team-high 15 points, 13 of those in the second half.

Wakes’ Corrinne Groves scored 12 big points for the home team, on her way to her third double-double of the year, as she pulled down 10 rebounds.

At one point in the first half, the Hurricanes had seven field goals from seven different players, for the game all 10 players that participated had at least one field goal.

The Hurricanes will play their final road game of the regular season, Thursday against the Seminoles of Florida State at 7:00 p.m.  In their previous meeting this year FSU pulled out a 75-70 win at the BankUnitedCenter.