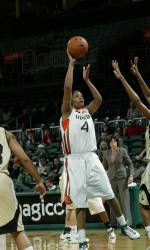 Hurricanes to Square-Off at Wake Forest

Miami played a tough game against the No. 2 North Carolina Tar Heels on Thursday night, falling 61-79.  The Hurricanes held the Tar Heels nine points under their season average and forced 23 turnovers, but were only able to hit 24 of 82 shots, for a 29.3 shooting average.

Wake Forest has had a week to make adjustments for the Hurricanes after their 20-point loss at the hands of the NC State Wolfpack.  Their lone ACC win came over the Virginia Tech Hokies on Feb. 7, a team that defeated the `Canes in overtime on Feb. 11.

The Demon Deacons are led offensively by juniors Alex Tchangoue and CorrinneGroves.  Groves averages a team-high 11.4 points per game while Tchangoue is right behind her with 11.3 per contest.

The Hurricanes hold a 3-2 all-time advantage over the Demon Deacons, including the last two.  Last season, Miami defeated WakeForest 77-51 in Coral Gables last season and the last time the `Canes were in Winston-Salem they came out on top 79-71 during the 2006 season.