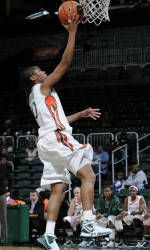 The Hurricanes have lost eight of their past nine. Trailing 12-9, the Tar Heels scored 16 unanswered points in a span of 5:50 in the first half and took the lead for good. McCants scored eight points during the spurt.

Jessica Breland’s short jumper with 7:12 remaining in the half capped the run. Reid hit three 3-pointers in the next 1:50 as the Hurricanes cut North Carolina’s lead to 27-21. Damisha Moore’s field goal with 3:50 left again cut North Carolina’s advantage to six at 29-23. But the Tar Heels outscored the Hurricanes 18-5 the rest of the half, behind Gray’s eight points, including two 3-pointers.