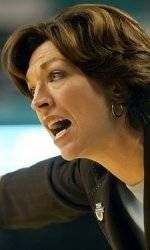 Hurricanes Travel to Raleigh to Take on N.C. State

Miami was only seconds away from consecutive wins in their last game against Virginia Tech, but driving lay-up from the Hokies’ Utahya Drye, forced overtime.  In the extra period the Hurricanes were outscored 12-4 and fell to 1-2 in overtime games on the season.

Senior guard Maurita Reid remains the scoring (16.0) and rebounding (5.5) leader for Miami.   She scored a 26 for the `Canes in the VT  loss and will look to lead her team to their first ever win against N.C.State.

N.C. State is coming off a 19-point victory over BostonCollege Sunday at the Reynolds Coliseum.  Prior to that the Wolfpack had dropped two-straight at Virginia and FloridaState.

Khadijah Whittington is the leading scorer and rebounder for N.C.State as she averages a double-double every night with 17.3 points and 11.3 rebounds per game.  Shayla Fields is the only other player averaging double-figures with 12.5 points per contest.

The Hurricanes have never defeated the Wolfpack of N.C. State with a total of seven tries.  the two teams met for the first time in 1981 and it has been a one-sided affair ever since.

Since joining the ACC in 2005, Miami has lost four to the Coach Kay Yow’s squad including a 53-77 loss last season at the BankUnitedCenter.