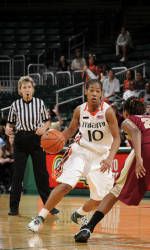 Virginia Tech’s Brittany Cook scored 27 of her career-high 36 points in the second half and overtime, leading her team to their first ACC victory of the season.

The Hurricanes held a 69-67 lead with 12 seconds in regulation, but off of a timeout, VT’s Utahya Drye drove down the right side of the lane and hit a runner with only 3.4 seconds remaining.  A prayer at the buzzer from Epiphany Woodson wasn’t answered and the game went to overtime.

In the OT period, Cook hit her both of her field goal attempts, unfortunately for <?xml:namespace prefix=”st1″ ns=”urn:schemas-microsoft-com:office:smarttags”?>Miami they were three-pointers.  The Hokies as a team went 5-6 from the field in the extra period, outscoring the `Canes 12-4.

With 2:06 left in the game, Miami held a five-point lead and were one second away from forcing a shot clock violation.  However, Drtye got off a 27-foot shot from the left side of the key that rattled in, cutting the UM lead to two.  Momentum seemed to swing away from the Hurricanes after that point, heading into overtime.

The Miami defense was impressive in the first half, as it held the Hokies without a single point for 6:42turning a 19-11 deficit into a 28-19 lead with 5:17 left in the period.  Virginia Tech then cut the `Canes’ lead to four, heading into the break with a 32-28 score.

The Orange and Green will look for their third ACC win, but will have to do so on the road, as they face N.C.State in Raleigh this Thursday, Feb. 11 at 7 p.m.