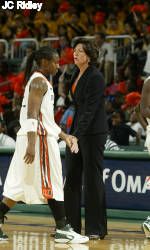 The <?xml:namespace prefix=”st1″ ns=”urn:schemas-microsoft-com:office:smarttags”?>University of Miami women’s basketball team (8-14, 1-6) didn’t have an answer for the Boston College Eagles’ frontcourt (17-5, 5-2) in a 70-42 loss at the Conte Forum, Sunday afternoon.<?xml:namespace prefix=”o” ns=”urn:schemas-microsoft-com:office:office”?>

Boston College started strong and never trailed in the contest.  By the first media timeout the Eagles had built a 12-4 lead behind the interior scoring of 6-6 freshman center Carolyn Swords, who never missed a shot in the game, going 8-8 from the field.

Miami head coach Katie Meier tried to mix up the lineup at the beginning of the game, but there was no answer for the inside presence of Boston College, who shot 70 percent from the field in the first half.

Miami returns from their tough road trip as they host Georgia Tech this Thursday Feb. 7 at 7 p.m. at the BankUnited Center.