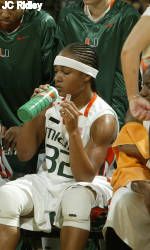 MIAMI FALLS TO NO. 5 MARYLAND

Langhorne, a 6-foot-2 senior center, started the game needing only 2 points to reach 2,000. She got it on her first shot, a 16-footer behind the foul line with 25 seconds elapsed.

Langhorne already owns the school rebounding record, male or female, with 1,111. Juan Dixon is the school leader in scoring with 2,269, one of five men with at least 2,000 points.

Kristi Toliver had 10 assists, giving her 508 for her career, and Marah Strickland scored 14 to help Maryland improve to 16-0 at home. The Terps (23-2, 7-1 ACC) had an easy time of it after playing two straight double-overtime games, a win over Georgia Tech and a loss at North Carolina.

Maurita Reid led Miami (8-13, 1-5) with 15 points. The Hurricanes have lost four straight, and this was by far their most lopsided defeat of the season. But it wasn’t nearly as bad as the 111-53 thrashing they absorbed against Maryland in January 2007.

Miami kept up early, but Maryland took control by asserting itself inside. After the Hurricanes pulled in a tie at 14, Langhorne scored 7 points and forward Jade Perry made two layups in a 16-4 run that made it 30-18.

At that point, Langhorne had half her team’s points and was 9-for-9 at the foul line.

Miami closed to 34-23 before backup guard Kat Lyons drilled a 3-pointer, Marissa Coleman scored 5 straight points and Laura Harper added a follow-shot in a 10-0 run to end the half.

The run continued after halftime. Layups by Langhorne and Harper made it 48-25 before Epiphany Woodson made a basket to end Miami’s scoreless drought at 6 minutes, 26 seconds.