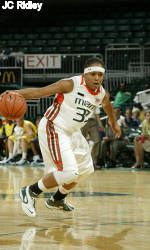 Miami Done in by Second Half

The University of Miami women’s basketball team (8-11, 1-3) was unable to hold on to an 10 point half-time, as the University of Virginia Cavaliers (14-5, 3-1) scored 53 second-half points in a 79-68 game at the BankUnited Center. <?xml:namespace prefix=”o” ns=”urn:schemas-microsoft-com:office:office”?>

It was a tale of two halves Monday night in <?xml:namespace prefix=”st1″ ns=”urn:schemas-microsoft-com:office:smarttags”?>Coral Gables.  The Miami Hurricanes had built a 10-point lead at the half, before Virginia out paced them in the second period.

Virginia made their run to open the second half, scoring 12 of the half’s first 14 points, as they game was tied only 3:25 into the half.  Miami regained the lead briefly on their next possession, but UVA answered and the UM would never recover.

The Hurricanes came into the game averaging 6.4 three-pointers per contest and seemed on their way to get at least that, making four in the opening period.  However, they went 0-8 from beyond the arc in the second half.

Freshman point guard Epiphany Woodson, who has become a vocal leader for the `Canes, scored 11 points on the night.  Woodson was able to drive the lane and create contact, reaching the foul line on five occasions

Maurita Reid of Miami and Lyndra Littles of Virginia led all scorers with 20 points in the game.  Senior Carla Williams has now made it three straight games in which she has scored in double figures, with 10 points.

The Hurricanes remain at home as they face rival FloridaState at the BankUnitedCenter this Thursday at 7 p.m.