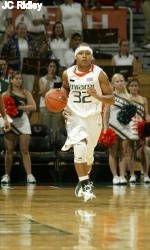 The <?xml:namespace prefix=”st1″ ns=”urn:schemas-microsoft-com:office:smarttags”?>University of Miami women’s basketball team travels to Clemson, S.C. to take on the Clemson Tigers in the Hurricanes second ACC game of the season, Thursday night at 7 p.m. at the Littlejohn Coliseum.  <?xml:namespace prefix=”o” ns=”urn:schemas-microsoft-com:office:office”?>

Miami is coming off a 72-84 loss to No. 12 Duke, where Maurita Reid scored a game-high 22 points.  For the fourth straight game, Reid has score 20 or more points.  She has also matched her career-high in each of those four games with five made three-pointers.

The Hurricanes may be 7-9 on the season, but they have played well as of late and look to prove they are better than their record.  With a win against Clemson, UM will be 1-1 in conference play and within a game of .500 overall.

A Look at Clemson

Clemson looks to get back into the win column against the Hurricanes after dropping four straight, including a 46-110 loss to #5 Maryland in their ACC opener.

The Tigers are a well balanced offensively, no player is averaging double-figures in scoring but eight  players average at least five points per game.  D’Lesha Lloyd leads the way with 8.8 points per game.

Since joining the ACC in 2005 Miami is 2-1 against Clemson, but the Tigers took the last meeting.  Winning, 79-69 in Coral Gables a year ago.