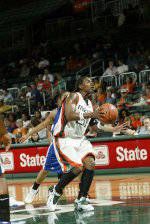 Miami struggled in the first game of the UM Holiday Tournament in a 53-54 loss to Maine.  First-half turnovers were too much to overcome in the one-point loss.  However, in the second game of the tournament against Central Arkansas, the Hurricanes exploded for 90 points, by far the most of the season.

Miami faces Charleston Southern in their last game before the start of the ACC schedule and they look to get within a game of .500 before they face No. 12 Duke this Satuday, Jan. 12.

A Look at Charleston Southern

Charleston Southern has fallen on tough times recently, having lost six straight games and 10 of their last 11.

The Buccaneers are led on offense by Pam Tolbert, who leads her team with 16.1 points per game.  Natalie Caldwell averages just under 10 points per contest and has dished out 29 assists on the year.

The University of Miami has sponsored women’s basketball since 1972, but the Hurricanes and the Buccaneers from Charleston Southern University have yet to meet.