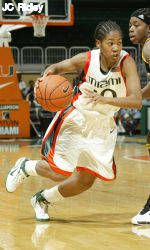 Hurricanes Fall in First Round of UM Holiday Tournament

The University of Miami women’s basketball team (5-8) was unable to overcome a 12-point halftime deficit, falling to the University of Maine (3-9) 53-54 at the BankUnited Center in the opening round of the UM Holiday Tournament.   <?xml:namespace prefix=”o” ns=”urn:schemas-microsoft-com:office:office”?>

<?xml:namespace prefix=”st1″ ns=”urn:schemas-microsoft-com:office:smarttags”?>Miami senior Maurita Reid had her best game of the season, scoring 25 points while tying a career-high with five three-pointers.  Reid also picked up seven steals in the contest raising her average to 4.2 thefts per game.

Down by 13 at the break, the Hurricanes like they have so many times this year, started to claw back in the second half.  Reid led the charge as she scored 16 points in the later period.  Her three-pointer with 1:34 left made it a four-point game.  Carla Williams cut the lead to two at 54-52 with 24 seconds left.

Reid grabbed a defensive rebound with 13 seconds left and then fed Williams under the basket, where she was fouled attempting the game-tying layup.  Williams was only able to hit the second of her two free-throws, forcing the `Canes to foul on the inbound.

Maine’s Emily Rousseau was unable to hit the front end of the one-and-one.  With no timeouts remaining, Miami pushed the ball up court.  The Black Bears were able to get back on defense leaving only a desperation 40-footer from Albrey Grimsley that rattled out at the buzzer.

Turnovers doomed the Hurricanes in the first half as they committed 13 to only five for the visitors.  Miami briefly took a one-point lead in the half on Reid’s jumper with just over seven minutes left.  Maine quickly took the lead back and never trailed again.

Williams had the best game of her season as well, going 5-6 from the field in scoring a season-high 12 points.  Freshman Briyana Blair provided a spark, scoring four fast-break points on consecutive possessions midway through the second half

Miami will play the loser of the Central Arkansas/Toledo matchup tomorrow at 5 p.m. at the BankUnitedCenter.  The championship game will begin at approximately 7 p.m.