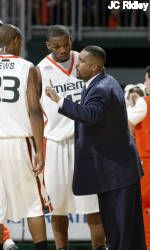 CORAL GABLES, FLA. – The undefeated University of Miami men’s basketball team continues its climb in the rankings and is No. 19 in both the AP Top 25 and the USA Today/ESPN Top 25 Coaches Poll released today.

It marks the second-straight week the Hurricanes have been ranked among the nation’s top-25 teams, and is the highest ranking for Miami since earning a No. 16 ranking by the ESPN/USA Today Poll on March 3, 2002, and No. 17 ranking by the Associated Press on Feb. 18, 2002.

It also marks the highest ranking for a Miami squad this early in the season.

Last week the then-22nd ranked Hurricanes won three-straight games by an average of 30 points an outing.

No. 19 Miami returns to competition on Sat., Dec. 29, taking on Winthrop in the first game of the MetroPCS Orange Bowl Basketball Classic at the BankAtlantic Center in Sunrise, Fla., at 4 p.m. Winthrop (6-5), who advanced to the second round of the NCAA Tournament as an 11-seed last season, comes off Friday’s 62-59 win over Old Dominion. Temple and Florida will meet in the tournament’s second game, scheduled to begin at approximately 6:30 p.m.

Tickets for the MetroPCS Orange Bowl Basketball Classic begin at $15 and are available for purchase through the Orange Bowl Committee Ticket Office (305-341-4701) or online at Ticketmaster.com.