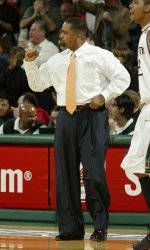 CORAL GABLES, FLA. – After nine-straight wins, including five away from the BankUnited Center, the University of Miami men’s basketball team has jumped into the top 25 in a pair of national polls.

The Hurricanes are ranked No. 22 in both the USA Today/ESPN Top 25 Coaches Poll and in the AP Top 25, both released today.

“I’m proud of the hard work that both the players and staff have put into building a winning team,” said fourth-year head coach Frank Haith. “We are going to continue to work to improve.”

After receiving an increasing amount of votes in both polls for the last month, Miami is ranked among the nation’s top 25 for the first time since a No. 21 showing in both polls during the week of Mar. 10, 2002.

The Hurricanes, among just 14 undefeated Division I programs, also top three RPI polls with the nation’s 18th-toughest schedule to date.

The 22nd-ranked Hurricanes return to the hardwood on Monday, Dec. 17, at the BankUnited Center, kicking off a three-game homestand versus Stetson at 9 p.m. The game will be broadcast on FSN-Florida.