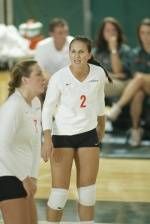 CORAL GABLES, Fla. – Coming off an impressive 3-0 win over Boston College at home on Sunday, the University of Miami volleyball team will look to carry its momentum over into this week’s matches as the Hurricanes head to Clemson and Georgia Tech for the final road trip of the season.

Miami (12-15, 6-12 ACC) will face the league-leading Tigers in Clemson Thursday, Nov. 15 at 7 p.m. before making the short trip southwest to Atlanta to take on the Yellow Jackets the next night at 7 p.m. Both matches will be broadcast live via ACC Select at www.ACCSelect.com.

The Hurricanes, who have won three of their last five, will look to even the score with Clemson and Georgia Tech after each team picked up wins over UM in Coral Gables the first week of October. The trip marks the final road trip for UM seniors Ciara Michel and Michelle Bruin.

During this past Friday’s match against Maryland, setter Katie Gallagher became the first UM freshman and just the third player in school history to record 1,000 assists in a season when she picked up 10th assist of the night against the Terps. Gallagher joined only Jill Robinson, who reached the mark on three separate occasions, and Mallorey James as the only Hurricanes to reach the milestone. In two matches over the weekend, Gallagher totaled 86 assists (14.33 pg), 10 digs, six kills and three aces. On the season, she is averaging 10.76 assists in addition to adding 72 kills, 262 digs and a team-high 62 aces.

Another Hurricane is on the brink of making history as sophomore libero Cassie Loessberg heads into the weekend needing just eight digs to set a UM record for digs in a season. Loessberg, currently with 492 digs through 27 matches, needs just eight more to break Jamie Grass’s school record of 499 digs set in 2002. When UM went up against Clemson and Georgia Tech earlier this year, Loessberg tallied 17 digs against the Tigers and 18 against the Yellow Jackets.

With Angelica Ellis recording four kills in UM’s win over BC, she became the seventh Hurricane to reach the 100-kill mark this season. Genny Mayhew, who has led the team offensively throughout the year, is coming off one of her better weekends, having hit a combined .391 against Maryland and Boston College. Against the Eagles, Mayhew hit .457, recording 19 kills while committing just three errors in 35 attempts.

About Clemson
The Tigers enter the weekend with the league’s top record overall (24-3) as well as conference mark (17-1). Currently sitting just outside of the CSTV/AVCA Top 25, Clemson’s only loss in league play came Nov. 2 when the Tigers fell at Virginia, 3-0. Prior to the loss, the Tigers had won 17 straight and since the loss have won three in a row versus Virginia Tech, Wake Forest and No. 14 Duke. Danielle Hepburn, the current ACC Player of the Week, leads the team in kills per game (3.81), hitting percentage (.399) and blocks per game (1.45). Megan Steiner, who shares the team-best .399 hitting percentage mark with Hepburn, averages 2.84 kills per game is second on the team with a 1.13 blocks per game average.

About Georgia Tech
The Yellow Jackets are currently in third place in the ACC standings with a record of 19-9 on the season and 13-5 in league play. Georgia Tech has won four straight and eight of its last nine, with the lone loss coming at Clemson, Oct. 30. Recently, GT picked up wins over nationally-ranked Duke and Wake Forest in Atlanta this past weekend. The team is led by Talisa Kellogg on the offensive attack as she is averaging four kills per game this season. Allie Niekamp and Mary Ashley Tippins lead the offense with 890 and 576 assists respectively while Michelle Kandell averages a team-best 4.85 digs per game.

Clemson holds a 6-2 advantage all-time over Miami with the `Canes last win over the Tigers coming Sept. 30, 2005 in Coral Gables. Georgia Tech owns a 4-2 mark against UM, including a split last season when each team won on its opponent’s court.

Fans can also follow both matches via GameTracker at www.hurricanesports.com. To access GameTracker, visit the team’s schedule on the Miami volleyball page.